In his former appearance, he looks like a muscular man with slightly better then average height, but his current appearance is average with a gentle aura after the modification by the goddess Lulutia.

In the manga and Reboot novel illustrations, he has dark-brown hair and brown eyes.

Ryoma is a kind person who cares for others when they need help. As a result, he tends to overreact to his mistakes; when he fixes them, people are surprised as the Earth standards do not exist in the new world.

The only real disappointment he suffered was learning he died in a lame way (not knowing it was Earth God throwing a tantrum that he didn't snap and become a mass murderer like he was programmed to).

Ryoma was a lonely man who led a life filled with hardships until he died from an unfortunate accident during his sleep. In the afterlife, he is greeted by three gods who grew fond of him and send him to another world as a child, where he makes use of his innate knowledge and abilities, combined with the gods' blessings to live a new life filled with challenges and happy meetings.

Ryoma later learns from the Gods and accepts that despite his past life's memories, he has the mentality of a child. Thus he has to go through maturing emotionally all over again.

Ryoma was a 39-year-old man from Earth, Japan. He died from blood loss after he sneezed four times and hit his head on the ground. He was reincarnated as an 8 year old boy in another world, in which he could use magic given to him by three major gods; Gain, Kufo and Lulutia.

Before he reincarnated, he had hobbies like watching anime, playing games, and reading manga and light novels. His life could be described as extremely plain (or in another sense, tragic), He was overloaded with work, and to himself, perhaps without any purpose, as indicated when he wasn't surprised nor saddened after his own death. He had never experienced a romantic relationship. He practiced meditation every day and had been trained in different martial arts from a young age. After he was reincarnated into the fantasy world, he kept all of the skills he accumulated from his previous life on Earth.

Slimes mentioned, but Ryoma doesn't own.
Possible slime evolutions, based on what they are eating.
Ch 120. Acid slime that likes eating the neutralized chemical from caustic soda (soap making). Acid slime that likes eating the completed soap. Sticky slime that prefers to eat the stems of the dante flower. Regular slime that prefers to eats ash.
Ch 141. Slimes that show a response to other types of stones, such as magic stones, ores, or gems.
Ch 199. Crab slime, Shell slime, Net slime, Charcoal/Sand slime, Poison needle slime, Parasite slime, Ceramic slime, Water plant slime, Seaweed slime.
Potentially a slime for every type of mana Ryouma can use.
Other types of magic:
Other monsters:

Ryouma's magic skills after acquiring his status board 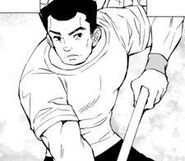 Adult Ryoma
Add a photo to this gallery

Retrieved from "https://kamitachini-hirowareta-otoko.fandom.com/wiki/Ryoma_Takebayashi?oldid=2513"
Community content is available under CC-BY-SA unless otherwise noted.